In the near future climate change will increase pressure on ecosystems in manifold ways. This pressure is acting on all structural levels of ecosystems. Therefore, nature conservation programs, like the European Habitats Directive, are facing the challenge of how to adopt management strategies to changing environmental conditions. Many methodologies have been developed in the past few years to assess habitat coherence. This work attempts to bring together some of these well developed methods, in order to create a more ecological and thus holistic approach to assess the implications of climate change on habitat coherence of the European Natura 2000 network in Germany.

This work consists of four parts. In the first preparatory part, three to five habitats out of Annex I of the Habitats Directive are exemplary chosen based on several criteria derived from literature and expert questioning. First, the habitats should exhibit sensitivity to climate change following temperature and moisture gradients in principle, further dependencies on factors like duration of vegetation etc. shall be considered. Second, the habitats should be capable to adopt (move and establish) on temporal scales of climate change, raised bogs for instance would be ineligible alone for the reason of formation-duration. Third, the definition of habitats should be unambiguous. Fourth, the habitats should hold relevance for Germany’s Sites of Community Importance (SCI).

The second part focuses on modelling future occurrence probabilities for habitats in Germany (embedded in the dynamics of Europe) under climate change, to test the general assumption that habitats differing in their today’s ecological distribution will respond differently under climate change. In order to get a better understanding of the gradual changes over time, the modelling period is split into equidistant time steps. A moving window technique is applied to calculate the climatic variables for each time step.

The future occurrence probabilities for habitats are calculated for a full dispersal scenario, allowing all habitats to shift freely through the landscape according to their environmental envelope, including climatic variables and soil properties.

In the third part, least cost paths, respectively corridors, between habitats are modelled for different scenarios. The simplest scenario is the Euclidean distance between pairs of habitats, referred to as baseline. Further scenarios might include effects of natural and / or anthropogenic dispersal barriers.

Before calculating corridors, some future habitats need to be sorted out according to criteria like minimum size or location in unsuitable (future) land uses (e.g. in a city).

Under the general assumption that overall no negative effects of climate change on habitat coherence are anticipated for prevalent habitats (as these are more likely to adapt to climate change), the fourth and last part calculates connectivity indices derived from graph theory. This allows not only for a detailed comparison of the different scenarios of the previous step but also for an identification of priority habitat patches in the landscape. In addition, the last step opens up the opportunity to include mean mobility ranges of habitat types as an exponential decay function. These mean mobility ranges are based on the most influential key species of the selected habitats according to the Interpretation Manual Of European Union Habitats. Hereon, literature research is carried out to infer dispersal mechanisms and distances of the identified species. Last but not least, implications and recommendations for nature conservation in Germany can be inferred. 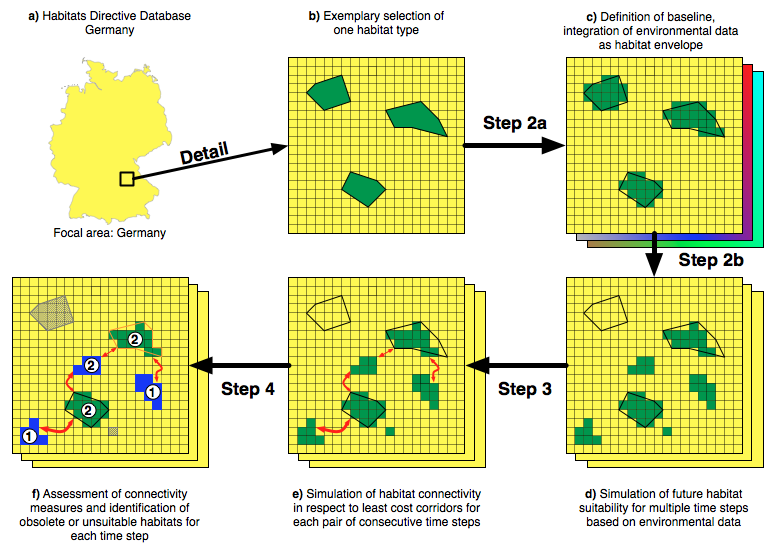